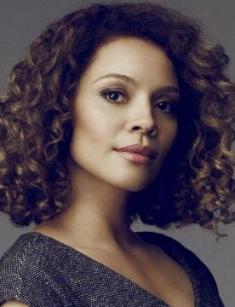 Carmen Elizabeth Ejogo is a British and American actress who also got recognition as a vocalist. She is famous for her roles in Boycott, Sparkle, and Fantastic Beasts and Where to Find Them. Besides, kids loved her Saturday children’s programs on American television.

The would-be celebrity was born in Kensington, London, on October 1973; other sources claim it was 1974. The girl’s Nigerian father, Charles Ejogo, moved to Great Britain and founded his own business. The mother, Elizabeth Douglas, came from Scotland; she used to be a hippie in her youth and later got hired as a tourist guide.

Carmen has an elder brother, Charles, who inherited not only his father’s name but also his entrepreneur abilities. Charles participated in Dragons' Den, the first reality show for businesspersons. In the first episode, the young man’s investment to vending machines proved to be beneficial; soon, he signed a contract with a famous company.

Carmen went to the Oratory Roman Catholic Primary School in Chelsea. At 12, she had her first stage experience and decided to focus on acting. The young woman moved to the United States and attended many professional workshops. Ejogo became pretty popular when she began to host children’s programs aired before Walt Disney movies on weekends.

12-year-old Carmen debuted in the British musical Absolute Beginners; she had the chance to collaborate with David Bowie. The ten-year career break followed. In 1996, the young woman came back and appeared in the fantastic thriller Cold Lazarus; the crime comedy Metro with Eddie Murphy, the crime movie I Want You starring Rachel Weisz, and the musical Love's Labor's Lost with Alicia Silverstone followed.

The historical biopic Sally Hemings: An American Scandal and the drama Boycott were significant for the artist’s career; the latter project brought her the nomination for the NAACP Image Award. 1998 was marked with the thriller The Avengers with Uma Thurman. Although the project was pretty ambitious, it failed: there were eight nominations for the Golden Raspberry and one victory.

One or two movies with Ejogo appeared every year. In 2001, she had a part in What's the Worst That Could Happen? and collaborated with Martin Lawrence and Danny DeVito. The musical drama Lackawanna Blues had a Golden Globe nomination. In the Christmas melodrama Noel, Carmen personified Dr. Matthew Batiste; Penélope Cruz and Paul Walker played the main characters. Besides, Carmen participated in the crime series Kidnapped.

The music melodrama Sparkle turned out to be a breakthrough; it was the last project of Whitney Houston. Apart from that, the actress gained the lead parts in the thriller Zero Hour and the melodrama Born to Be Blue.

The 2014 thriller The Purge: Anarchy gave Carmen the lead role, the nurse Eva, who had to escape from a crowd of murderers that fled the streets of America once a year. It was a great honor for Ejogo to participate in the drama Selma and personify the wife of Martin Luther King, Coretta Scott King. The movie showed the story of the movement for black people’s rights. David Oyelowo played Coretta’s husband.

In 2016, Carmen was invited to the adventure fantasy Fantastic Beasts and Where to Find Them; she co-starred with Colin Farrell, Alison Sudol, Eddie Redmayne, and Katherine Waterston. The story is set before the events in Harry Potter. The project was a success and grossed $840 million, which was three times as much as its budget and promotion costs.

Carmen Ejogo is a popular singer who has collaborated with various musicians. She performed the song “Candles” with DJ Alex Reece and recorded the hit “Slowly” and the music video for it with Tricky. The woman used to have her own show on BSB channel and advertised the music she considered to be top-quality and attractive to young people.

The actress often sang in her movies, for instance, in Love's Labor's Lost. In Sparkle, one could hear Carmen’s voice in the following hits “Yes I Do”, “Jump”, “Something He Can Feel”, and “Hooked on Your Love”. These songs were included in the movie soundtrack album in 2012.

Carmen Ejogo has been married twice. In 1998, the musician Adrian Thaws also known as Tricky became the artist’s husband. The young people shared the love for music; they recorded songs together, and Carmen participated in Tricky’s shows. However, their passion paled away quickly, within a year; the couple divorced.

At the end of summer 2000, Carmen married her second husband, the actor and producer Jeffrey Wright whom she had met when they were working on the biopic Boycott. The actress used to have the double second name, Ejogo-Wright. They had two kids: the son Elijah and the daughter Juno. The marriage lasted for 14 years.

Today, Carmen has no partner; she lives in Brooklyn, New York, with her kids. The celebrity’s Instagram is full of photos about acting; she rarely posts something personal and prefers to keep her life private.

In 2017, the artist appeared in the sequel of the fantastic saga Alien: Covenant; she played the wife of Chris Oram (Billy Crudup), the captain of Covenant. The same year, Carmen appeared in the American series The Girlfriend Experience as the main character. The project united several genres: thriller, legal drama, and melodrama; it was broadcast for two seasons.

Soon, Ejogo joined the cast of another thriller, It Comes at Night. It is the story about the family that has to escape from an unknown epidemy and hides in a forest. The spouses and their teenage son meet other refugees there. Joel Edgerton played one of the main characters.

Carmen looks splendid in comedies, too. The 2017 movie Roman J. Israel, Esq. only proves that. As the story runs, an experienced lawyer cannot find a common language with his new boss. Roman is different from other people: he is wearing 1970s clothes, and his hairstyle belongs to that epoch; however, his memory is phenomenal. Carmen collaborated with Denzel Washington and Colin Farrell in this project. The premiere took place in Toronto, but the director cut the movie later.

The 2018 spin-off of Harry Potter, Fantastic Beasts: The Crimes of Grindelwald, is one of Carmen’s recent works. Jude Law personified young Dumbledore; Zoë Kravitz and Johnny Depp also starred there. Depp agreed to play in J.K. Rowling’s screen adaptation without having read the script.

In 2019, Ejogo continued to work on the series True Detective along with Scoot McNairy, Mahershala Ali, and Stephen Dorff.