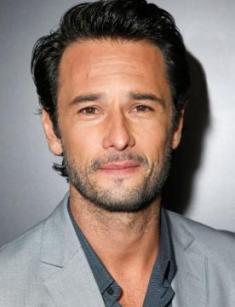 Rodrigo Junqueira dos Reis Santoro is the full name of the sex symbol and Hollywood star. But grateful fans of the actor, who became famous after the release of the film masterpieces 300 and Che, call him merely Rodrigo Santoro.

Rodrigo was born in August 1975 in Petrópolis, Brazil. The boy had Brazilian and Spanish ancestry. Santoro grew up in a family in which a cozy and creative atmosphere reigned. His mother, Maria José, a Brazilian sculptor and artist, instilled in her son a love of the beautiful. Rodrigo inherited a strong character and the ability to keep his eyes on the prize from his father, engineer Francesco Santoro.

The parents noticed the acting skills of their son when he studied at school. The boy participated in amateur performances without hesitation and felt comfortable on the stage.

But after graduating from high school, young Santoro entered the Pontifical Catholic University of Rio de Janeiro to study journalism. However, the young man soon realized that he did not like the chosen profession. Cinema was much more interesting. Therefore, Rodrigo began attending the Actor's Workshop of Rede Globo, a popular TV channel.

Soon Rodrigo Santoro began to build his career. The handsome young man was involved in several Brazilian series. The debut role in the melodrama Olho no Olho was successful. The aspiring actor was noticed, and in 1994, viewers already watched Rodrigo’s acting in the Brazilian soap opera Pátria Minha, which was broadcast in prime time.

Rodrigo Santoro continued to play in the TV series until the end of the 1990s. The best movies that were a resounding success in Brazil include Explode Coração, O Amor Está no Ar, Suave Veneno, and others. During these years, Rodrigo appeared only as a voice actor in the Hollywood film industry.

The first significant role in the feature movie went to Santoro in 2001. The movie Bicho de Sete Cabeças was released, in which Rodrigo portrayed a hero who got into a psychiatric clinic by some quirk of fate. This difficult role brought him the recognition of film critics and the first awards. Moreover, he also became famous abroad. After all, the movie which was shot in hot Brazil received the Golden Globe nomination for Best Foreign Language Film.

In 2003, Rodrigo was invited to play in the Italian movie The Roman Spring of Mrs. Stone. The shooting took place in Rome for two months, and Helen Mirren became Santoro's partner. The movie got high ratings and good reviews. Moreover, Rodrigo made it into Hollywood, which he dreamed of since childhood.

The very first Hollywood movie, the blockbuster Charlie's Angels: Full Throttle, made the Brazilian world-famous. Santoro brilliantly fitted in with the cast of the movie, which starred Cameron Diaz, Drew Barrymore, Lucy Liu, and Demi Moore. Rodrigo portrayed killer Randy Emmers, who died in a battle with the Angels.

They managed to reach the movie stardom, participating in the Christmas comedy Love Actually. It was a world cinema hit, after which Rodrigo Santoro became a recognized Hollywood star. Another highly-rated project of this time is the adventure series Lost, in which Santoro appeared as Paulo.

In 2004, Rodrigo Santoro participated in the filming of the Brazilian melodrama Senhora do Destino, in which he played the title character's lover. The role of the handsome heartthrob in the melodrama series Mulheres Apaixonadas was no less brilliant.

The Brazilian did not miss a single chance to become even more successful and popular. Rodrigo did not refuse to appear in advertising. In 2002, he played in a commercial with the famous compatriot, Gisele Bündchen. In 2004, the man appeared in an advertisement for the legendary perfume Chanel No. 5, alongside Nicole Kidman.

As for the cinema, the next starring role went to Rodrigo in the blockbuster 300. The actor has to work hard to prepare for the part in the project. Santoro built muscle quickly and underwent a painful full body hair removal procedure. Moreover, Santoro read several treatises of Herodotus to better understand the image of the Persian king, Xerxes I.

An exciting experience for Rodrigo Santoro was the participation in the creation of the 2008 Hollywood comedy I Love You Phillip Morris about a respectable citizen who was imprisoned due to a misunderstanding and fell in love with a cellmate. Jim Carrey and Ewan McGregor starred in the film.

The most notable recent projects in Santoro's filmography are considered to be the movies The 33, 300: Rise of an Empire, Rio, I Love You.

The hot Brazilian actor first fell in love when he was barely 14 years old. The love affair with the Brazilian screen star, Luana Piovani, lasted for two years. But this relationship was replaced by another when Rodrigo Santoro was romantically involved with the beautiful model, Ellen Jabour. The couple dated for four years, but in 2008 it became known that the relationship ended.

During these years, the actor was repeatedly included in the lists of the most beautiful and sexy people in the world. In 2004, Rodrigo was on the People Magazine's 50 Most Beautiful list, and in 2006 Santoro was ranked number 12 on People Magazine's 2006 Sexiest Man Alive list. The photos of the handsome man appeared in the magazines, alongside the pictures of Hugh Jackman, Brad Pitt, and Jude Law.

Nowadays, Santoro is an outstanding representative of the dream factory, but he is not going to move to Los Angeles. The actor lives mainly in his homeland, Rio de Janeiro. It is known that Rodrigo devotes a lot of time and effort to charity.

Nowadays, the film career of the Brazilian actor continues to take off. In 2016, Santoro starred in four successful projects. The actor got a supporting role in the sports drama Pelé: Birth of a Legend. Santoro was also lucky to join the all-star cast of the western Jane Got a Gun. Natalie Portman, Joel Edgerton, and Ewan McGregor portrayed the title characters in this film.

Rodrigo appeared as Jesus Christ in Timur Bekmambetov’s peplum Ben-Hur. The movie was shot in the USA at the Paramount Pictures film studio. The plot was based on the story, focusing on a prince who was betrayed by his brother. Jack Huston and Toby Kebbell played the title characters.

The most popular project of 2016 was the fantasy western Westworld, in which Santoro portrayed hero Hector Escaton, the leader of a criminal gang. The project impressed film critics and viewers with an unusual story and an outstanding cast, which consisted of Ben Barnes, Anthony Hopkins, Thandie Newton, Evan Rachel Wood.

At the beginning of 2018, the drama Un Traductor premiered, touching upon the topic of the Chernobyl disaster. Rodrigo Santoro played the protagonist, a Russian professor and teacher at the University of Havana, who interpreted for Ukrainian children who suffered from a nuclear accident and went to Cuba for treatment. Every day, the professor faces inhuman torment and death of small patients.

Rodrigo Santoro has a net worth of $10 million.