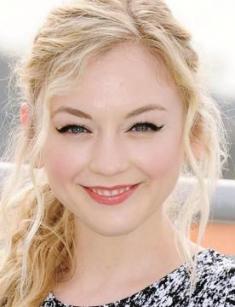 Singing actors are not rare: many artists begin their career from music and then switch to screens. Sometimes, they realize they are better at acting and give up music, like Mark Wahlberg and Will Smith. Some of them returned to singing because movie experience did not work out well, like Britney Spears. Finally, some musicians play in movies and series splendidly and come back to record studios, like Eminem and Miley Cyrus.

People often believe that one cannot be equally good at singing or playing instruments and starring in movies. However, rules exist to be broken: Johnny Depp, Jamie Foxx, Justin Timberlake, and Emily Kinney are only a few examples who deal with various kinds of art successfully.

The would-be star of The Walking Dead was born in Wayne, Nebraska on August 15, 1985. The girl frequently moved with her parents and changed many schools.

Emily grabbed movie makers’ attention after two successful performances at the theater: the drama Spring Awakening by Duncan Sheik and Steven Sater and the tragicomedy August: Osage County. Before the woman entered the world of full-length cinematography, she took part in the short movie Hot for Teacher (2007) and the TV program The Gamekillers about game consoles.

2008 was marked with an episode of the detective series Law & Order: Criminal Intent starring Kathryn Erbe and Vincent D'Onofrio. The next year, the beginning actress appeared in the drama series The Unusuals with Amber Tamblyn, Jeremy Renner, Joshua Close, and Adam Goldberg.

2010 brought the series The Good Wife about a strong woman who found herself in an ambiguous situation because of her husband’s illegal actions. Julianna Margulies, Matt Czuchry, and Josh Charles took part there.

The next year, Kinney joined the cast of the comedy drama series The Big C about a woman fighting against cancer. Laura Linney, Oliver Platt, and the star of Hannibal Hugh Dancy played the main characters there. Besides, in 2011, Emily was given a role in The Walking Dead and collaborated with Andrew Lincoln, Norman Reedus, Lauren Cohan, Jeffrey Dean Morgan, Christian Serratos, Jon Bernthal, and Sonequa Martin-Green.

In 2012, the woman came back to Law & Order: it was the spin-off Special Victims Unit. Mariska Hargitay, Christopher Meloni, and the rapper Ice-T played the lead roles.

In 2014, when Kinney finished working on The Walking Dead, she was invited to the detective series The Following starring Kevin Bacon, James Purefoy, and Shawn Ashmore. This psychological thriller shows the maniac Joe Carroll and his successors who commit crimes in the Edgar-Allan-Poe-books style.

2015 started with an episodic role in the superhero series Flash and the drama series Masters of Sex with Michael Sheen, Lizzy Caplan, and Beau Bridges. Further on, Kinney co-starred with Clive Owen in the drama series The Knick by Steven Soderbergh. The story is based on the biography of the real person, Doctor William Stewart Halsted.

2016 brought the detective drama series Conviction about the daughter of the former US president. She organized the special unit that investigated the false-accusation cases. Hayley Atwell, Eddie Cahill, and Shawn Ashmore personified the protagonists.

Soon, the woman had another chance to appear in the DC-comics-based movie: Flash with Stephen Amell. Emily played Brie Larvan, one of the main characters.

The actress is not married and has no kids.

She used to date the guitarist Jon Siebels for a long time; rumors have it she is dating the musician Matt Houseman. The artist has given no comments about it.

Between two seasons of the series Arrow, Kinney worked on the drama series Ten Days in the Valley. It is the story about a TV producer Jane Sadler (Kyra Sedgwick) who is looking for her missing daughter. Emily personified the main character’s assistant, Casey.

Besides, Kinney presented the fourth studio album, Oh Jonathan, in 2018. Her previous works were as follows: Blue Toothbrush (2011), Expired Love (2013), and This is War (2015). The musician posted some new material on her Instagram to please her fans.