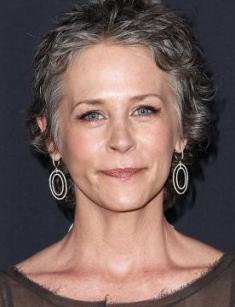 Actors most often become successful after eight or ten years of filming. During this time, they can work their way from acting courses and bit parts in TV shows to the leading roles in blockbusters. Sometimes they begin an acting career in childhood. Later, some of them rise to prominence (e.g., Natalie Portman, Daniel Radcliffe), but others can fail (e.g., Macaulay Culkin, Haley Joel Osment).

But there is another category of artists who become famous already at a mature age. These are Anthony Hopkins, Steve Carell, Melissa Leo, Bryan Cranston and, of course, Melissa McBride.

There is little information about the actress’s childhood. She was born on May 23, 1965, in Lexington, the second-largest city in Kentucky, USA. Melissa Suzanne (her formal name) was the fourth child of businessman John Leslie McBride and his wife, teacher Suzanne Lillian (née Sagley).

McBride first appeared in television commercials in 1991. Having learned to work in front of the camera, Melissa decided to try her hand at acting.

In 1993, she made her debut in the detective series Matlock, which told about lawyer Ben Matlock (Andy Griffith), who could investigate any matter.

A year later, the aspiring actress played a minor role in the TV series In the Heat of the Night, as well as in its continuation, the movie In the Heat of the Night: Give Me Your Life directed by Russ Mayberry (Star Trek: The Next Generation, The Equalizer, Magnum, P.I.). The series and the film were a hybrid of crime detective movies and action films. The story centers on Sheriff Bill Gillespie, Detective Virgil, and Lieutenant Bubba Skinner.

In 1994, Melissa also starred in the fantasy horror movie Mutant Species directed by David A. Prior (Deadly Prey, Future Zone, Zombie Wars). The film was inspired by the movie Predator with Arnold Schwarzenegger.

In 1996, the actress played a bit part in the detective series Profiler with Roma Maffia and Robert Davi. It was followed by a role in the cult TV series Walker, Texas Ranger with Chuck Norris. The action crime series told about the everyday life of a Texas Ranger named Firewalker.

In 1998, Melissa starred in the melodrama series Dawson's Creek, which became the start of a career for the stars such as Katie Holmes, Joshua Jackson, Michelle Williams, and James Van Der Beek.

The following year, the actress appeared in the television film Pirates of Silicon Valley directed by Martyn Burke (Power Play, Avenging Angelo, Under Fire: Journalists In Combat). The film shows the significant events in the life of Bill Gates and his rival Steve Jobs.

Since 2001, Melissa has sometimes worked as a voice actress in the parody cartoon Robot Chicken. In 2002, McBride starred in the drama The Dangerous Lives of Altar Boys, a film adaptation of the novel of the same name by Chris Fuhrman, shot by the famous director of music videos, Peter Care. In addition to Melissa, the film featured Emile Hirsch, Kieran Culkin (Macaulay's younger brother), Jodie Foster, and Vincent D'Onofrio.

Five years later, the actress starred in Frank Darabont’s (The Shawshank Redemption, The Green Mile, Buried Alive) fantasy drama The Mist, a film adaptation of the book The Mist by Stephen King. McBride’s partners on the set were Thomas Jane, Toby Jones, William Sadler, Chris Owen, and others.

Melissa appeared in the very first episodes of the series The Walking Dead. Frank Darabont invited her to the project, producing the film adaptation of the comic books of the same name by Image Comics, famous for the comics about Spawn. Norman Reedus (The Boondock Saints), Jeffrey Dean Morgan (Supernatural) and Jon Bernthal (The Punisher) also starred in this zombie horror series.

In 2016, Tom Gould and John Serpe’s comedy The Happys was released, in which Melissa played with Amanda Bauer, Jack DePew, Janeane Garofalo, Rhys Ward, and others.

The actress has not been married and has no children. Reporters spread rumors about her love affairs with colleagues, but McBride denied everything.

In the 80s, Melissa moved to Atlanta, where she lives today, but in 2017 she seriously thought about moving to Los Angeles.

She loves social media, especially Twitter (but there is no her page on Instagram.) She shares numerous photos and videos of filming and media events and also communicates with fans.

Carol Peletier is the actress’s character in The Walking Dead and the only heroine who has appeared in the series for so long. The love of viewers contributed to this fact.

McBride says that she plans to continue shooting in The Walking Dead, but she is already looking for new projects. There are rumors among fans that Melissa's heroine will participate in the spin-off Fear the Walking Dead not to leave the project but to have enough time to star in other films and TV shows. The actress does not comment on this information.

Melissa McBride has a net worth of $3 million.